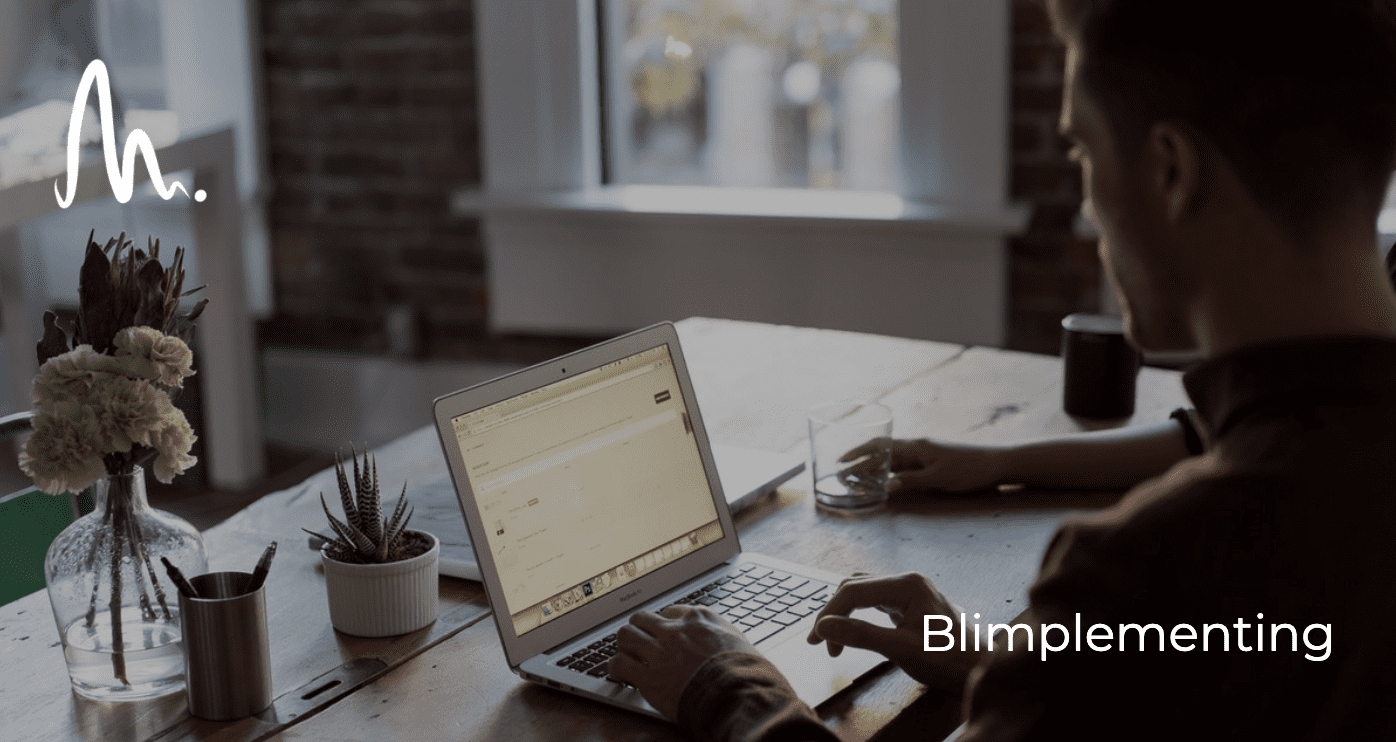 I want to talk about blimplementing.

Yeah, I did say blimpementing.

For you guys who’ve not come across that, it’s a cross between blueprinting out of your strategy and implementing at the same time.

As always, I try to give credit where credit is due.

On this occasion, a big credit and shout out to a guy called Brad Martineau over at Sixth Division in Arizona, Phoenix.

It’s a phrase I coined off Brad.

The way Brad describes it is, people get comfy with building digital marketing campaigns.

They usually get an idea: “Yeah, I want to do a birthday campaign “or a lead generation campaign, “or a customer survey campaign.”

Then they jump straight into the software and start building it.

Blueprinting & Implementing Together, Results In Blimplementing

So, you end up blueprinting it and implementing it.

Do your blueprints and your strategy and your implementation at the same time.

Ultimately, he goes on to talk about how you always get confused, and it’s not the right way.

You’re going to miss something.

Doing it on the fly is not the right way, and there’s a better way.

So, big shout out to Brad Martineau at Sixth Division.

I just wanted to take it for the English market and just sort of put it in some of the cases that I’ve seen blimplemented both be a disastrous sort of failure, waste a lot of time, cost money.

Also the better way; an alternative of doing the strategy and then the implementation as two separate pieces.

Some of the areas I’ve seen it happen is specifically, software providers.

A lot of software providers where they’ve got digital marketing to sort of get you into the content and say, “Hey, jump straight in and build a campaign.”

It’s rare if any time does I actually see it, where they actually say, “Before you use our software, “follow these step-by-step instructions to get better value out of it.”

Now, whether a lot of them don’t care, whether they’re not aware of this, or they just don’t believe in it, and this viewpoint’s along that all the way.

I know that the software providers who are watching this video will say, “Yeah, we’ve got a help centre, “we have onboarding, to do that.”

I’m not being too critical.

Then I’m telling you, you’re going to be costing you a lot of money, your campaigns are not gonna be as successful.

Or, you could speed up that time and get a better return on investment by doing it right.

So, what you want to be avoiding is, opening the campaign builder or the strategy or the art platform or Facebook, and just working on the fly.

You’ve not a chance to sort of take a step back off the whiteboard or your flip chart and really drill down to what’s actually required.

Incorrect campaigns are the worst thing.

Sending them out with the incorrect links or no links at all.

Somebody gets an email or a social ad with the wrong link in it doesn’t work, especially if you’re using paid traffic, paid search and social.

Can you imagine paying to send somebody to your post, or your link if it doesn’t work, especially if it’s an order form at the bottom of a funnel?

It can be really costly, both time and money, and usually, you miss the message or you miss some fundamental part.

As always, what I try and do is not just be, make you aware of some of these pitfalls that you could potentially be facing.

Let’s actually give you some actionable strategies to solve it.

How Do You Avoid Blimplementing?

We get asked a lot, “Mike, how do we avoid blimplementing? “How do we get past that?”

First and foremost, what I would say is, there are lots of software tools out there that can help you draw out your funnels.

There’s a buddy of mine over in the States called Jakob Michaelis and he has a product called funnelflows.com.

If you head over to funnelflows.com and check that out.

Jakob’s product’s awesome, and he actually helps you to map out, on a drag-and-drop builder, all your traffic sources, all your landing pages.

So what you do is, you use a tool like that.

But even before that stage, get your goal out.

Get your goal right, what wants to be done.

Then, just jumping back into what Brad Martineau at Sixth Division does with his campaigns, and it’s pretty cool, we really like that sort of product.

He has a straightforward path that if they enter the funnel and go all the way through the middle to that desired goal, what does that look like.

He also has what he calls exits.

If they don’t take that action

What Are Your Detours?

Obviously, if they do take the right action, what are the detours they would take?

Again, what Brad talks about there is not necessarily somebody entering your funnel, opening the email immediately, clicking through, downloading it, taking the goal to the call to action at the end.

They would usually stop in what he calls detours.

Again, this is not me stealing the Sixth Division stuff.

If there are any people jumping up and down now, saying, “This is a Brad Martineau, Sixth Division thing,” it absolutely is, and I’m giving full credit.

I highly recommend that certainly if you’re an Infusionsoft user, ActiveCampaign and people like that, go check them out.

I would highly recommend you buy the academy product.

Again, I’m not an affiliate for that.

I’m just trying to use this as a framework that we’ve used in our business, it’s been really helpful, and also, really giving credit where credit is due for Brad and his team over at Sixth Division.

So, sixthdivision.com is if you want to go and check that out.

Ultimately, get your process where they enter the funnel or the campaign all the way through to the end and what do you want them to do, and break that down.

Just because you want them to make a call to your sales team, you’ve got to break that down into stages.

Let me give you an example of a car salesman.

If you said to any car salesman, “What do you want to do today?”

But that’s broken down into numerous stages.

The first thing for him to sell a car;

You can see how a car salesman’s goal of “I want to sell a car,” is broken down into making the call, get them to the showroom, appraise the part exchange, do a test drive, structure the deal, negotiate, underwrite this, get them underwritten advance, and then present the order form.

Get that broken down in stages.

But also, ever any change the stoke, the part exchange is not the right value

How do you follow them up, say, “hey, you didn’t show up for your appointment.”

Think about those detours that Brad talks about.

So, straight through to the goal, the exits if they stop at any point, or the detours if you have to get them back on track.

People will use different analogies for this, and that’s fine, that’s just what we use.

Then, the 1,000 foot is actually a graphic design and the copy of that, putting it all together.

I hope you found that valuable, why you shouldn’t blimplement, elongated campaigns, costly in time and money and usually air is strewn in digital campaigns and social campaigns.

The rectification is, take a step back, draw it out on a whiteboard, draw it out on a flip chart, work out your entry point and your goal to the end, and each stage broke down as I gave you in the car salesman example.

Work out where they’re going to get stuck and what you would do in each stage.

If they do go through, but you need to take a detour around as we talk at Brad at Sixth Division.

Ultimately, what do you need to do in those detours to get them back on track?

Hopefully, that’s going to help you to blueprint and then implement a lot more accurately.

Whilst the extra time it will take you to work it out, believe you me, you’ll get your campaigns a lot faster, a lot quicker.

Ultimately, this should work and achieve more common goals.