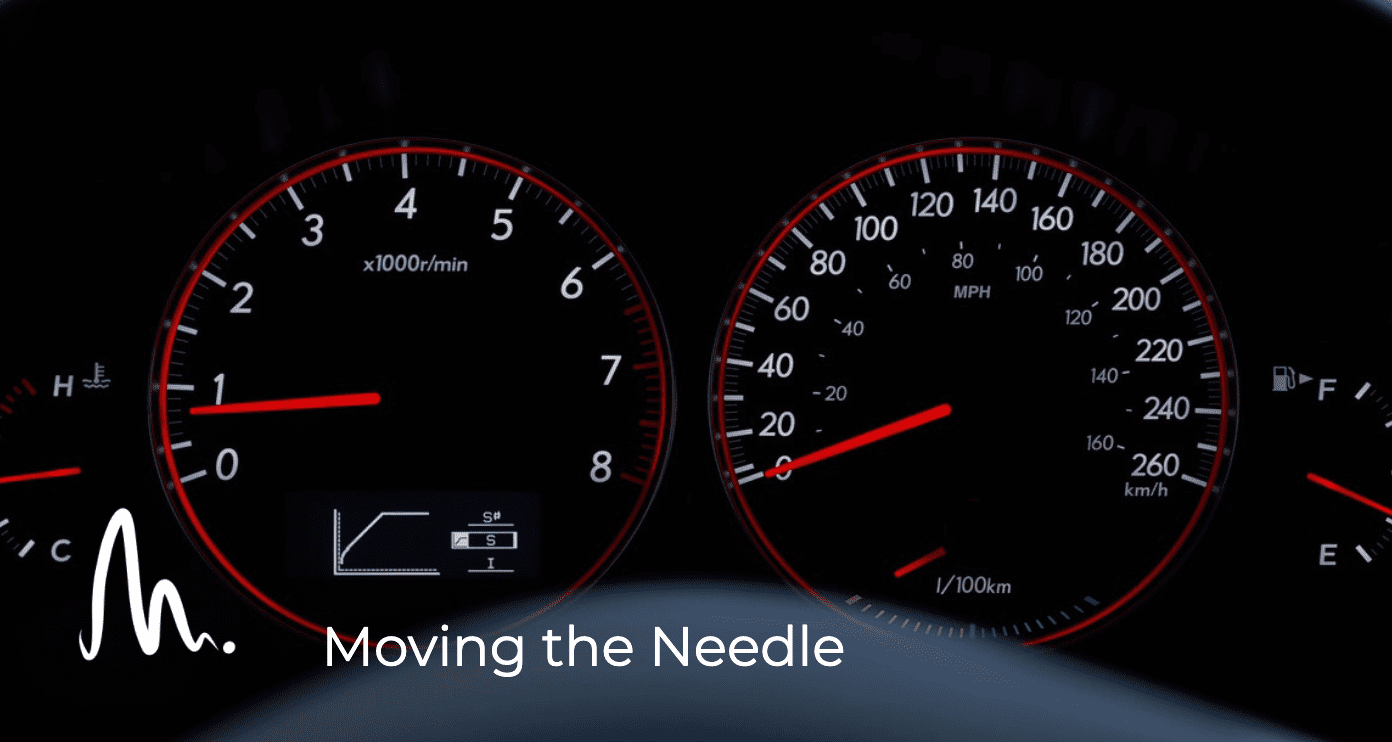 In this growth engine daily, I want to talk to you about moving the needle.

What I mean about moving the needle is seriously making an impact on the trading performance of your business, and what that’s going to take from a team, or yourself as a business owner to make that happen.

Congratulations if you’re in that pool.

How Are You Going To Move The Needle?

I’m not talking about a ridiculous one-off, one hit wonders that just have a blip because you won that one contract.

So, not going right up and then right back down.

There’s a great saying out there.

I’m not sure if it’s Zig Ziglar or somebody like that where it says you can’t expect different results doing the same thing.

Making nominal adjustments in your business, there’s a time for that.

I’m all for marginal gains.

They can make a big difference.

You’ll hear me speak about marginal gains a lot in these growth engine sort of videos.

I’m absolutely all for that.

However, what I’m talking about here is sitting down, doing a full evaluation, doing something that’s going to seriously move the needle.

I’ve been working with a company who work with a specific size of the business, typical model.

It’s a wider audience at the top, and lower.

So they’re probably getting a hundred plus inquiries a month, closing 18, 20, 25, one in four, one in five sorts of ratio.

With any market like that, then the sale price and the margin is going to be at a level, and they’re relying on high volumes of interest to funnel down a one in four, one in five conversions, 20, 25% conversion.

So we talked recently about flipping that, and saying what if we actually left that model there?

Yes, we can get better at it.

We can make the marginal gains, but why don’t we sort of entering into a new market.

That’s not very wide at the top and narrow at the bottom.

That is very narrow at the top, and it usually comes right down.

It’s not much narrower at the bottom.

Although, it can be used in a strategy called ABM, account-based marketing, and entering into that new market place.

Instead of them, and I’ll use an example sale price here.

This is not the real sale price, but I’ll use an example one.

Their closing one in four, generating 100 inquiries to do that.

So, there are half a million pounds of opportunities to close about 100 thousand pounds of the business.

Most companies would, and that’s fine.

But, I’m asking you to widen your vision here.

If you’re established, and you’re good at what you do, and you’ve got a little bit of capital around you, or you feel that you want to fund your business direct spend, then I’m asking you to look at the larger ticket business.

Purely and simply because these longer, these bigger opportunities, they’re a long burden.

You’re not going to get 100 of those inquiries and close 20.

That’s just how that market plays because there ain’t that big of fish up there.

There’s not the volume of it.

Outside of that, you’re going to be the late 80s, 90% of them are small, small to medium enterprises.

That big-ticket might only be half a million out of, maybe not even that, 250 thousand out of five plus million.

Then the real bigger tickets might only 100 thousand out of five million.

So, you can see you might be down to as low as a couple of per cent of market share.

So, if you accept that, and you also accept that those type of customers still have a need to buy your product or service, with the correct market research, competitor analysis, not only knowing what the demands of those bigger businesses are, but who are currently serving them.

If you can create a product, create a value proposition that is swifter and nimbler, lower cost to implement and gives them immediate value, so they can sit down and say yeah, we currently working with supplier A or partner A, but this supplier B or partner B offers a faster, more dynamic quicker route to market, higher return, whatever that would be.

Again, I’m not just talking about discounting here, because you would already have to have a tighter margin on those bigger accounts.

What I’m talking about here is having a rounded proposition that just makes sense.

The bigger businesses that don’t want to have to work it out, they will put companies through a long tender process, or longer sales cycles, and that’s at their end.

It doesn’t mean to say you should adjust your presentation or your pitch decks, or your proposals, in a long format.

A lot of them do appreciate a one, two, three-pager that sort of says who we are, what we do, why it makes a difference, and why you should buy it.

What if it was 50 thousand, and there were 100 boxes, wow that’s five million straight out of the gate.

Straight out of the gate, five million.

Now, I know what you’re saying.

Mike if was that easy, everyone would have been doing it.

Yeah, but the question that I’ve got for you today is when was the last time you took a look?

When was the last time you physically put management time down and said, “Hey I’m going to go and at least stick my head “above the wall of the pit and take a look at that market.”

Who Can Refer You Opportunities?

You may have enough customers who can refer you to those opportunities, which is a great start.

If you sit in your car, you pump the gear stick in neutral, with the handbrake on, if you rev your engine, that rev count is going to go and do that. It’s going to move.

If you’re happy where you’re at, this conversation is probably not for you.

If you’re not where you’re at, and you want to go and have a look at it, then actually go and pick out the top three people who buy your product.

If that’s the BBC, if that’s somebody like British Airways, that’s what it is.

Go and have a look at it.

Spend the right amount of time, and it might take you three months, six months, nine months, 12 months, to implement something like that.

It might equally take that long to close a sale, or even longer.

So, have you got the skill sets?

Have you got the appetite?

There’s certainly a market there.

They still need to buy stuff, and why can’t that be of you.

So, I hope you find that of interest, and it’s perked some ideas.